You would like to be informed about Jörg Immendorff's new arrivals in advance? Register now for free! 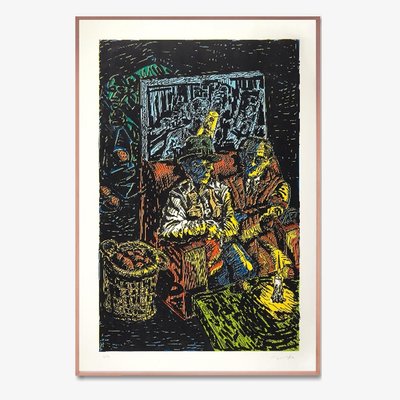 Jörg Immendorff artworks and editions for sale
Table of contents

Jörg Immendorff is numbered among the most renowned German artists of the post-war era. Besides his artistic occupation as graphic and performance artist, painter, sculptor, and stage designer, the socially committed artist cultivated close contacts to artist colleagues in West and East Germany. In addition to friendships with A.R. Penck, Sigmar Polke, Georg Baselitz, and Markus Lüpertz, he cultivated a special relationship to his reacher Joseph Beuys throughout his life, who has been a mentor and role model for his own artistic work.

Jörg Immendorff's painting and imagery, steadily shaped by political and historical reference to German history, represents the quarrels and conflicts of the post-war generation in divided Germany. His style always distinctive, partly surreal, representational, figurative - portrays critically the events and the state of the Federal Republic's society as a whole. 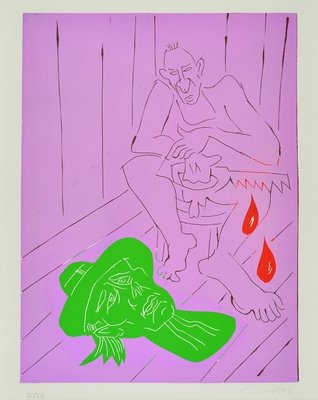 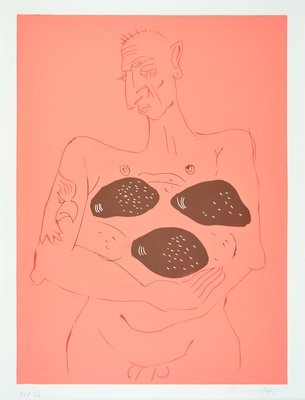 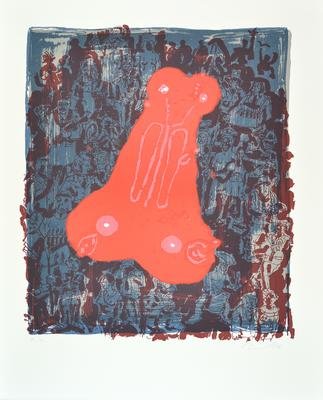 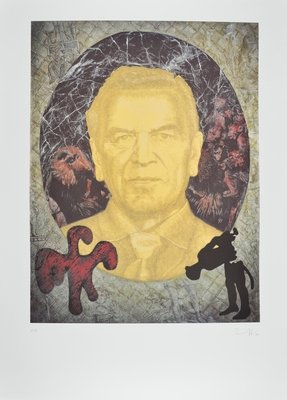 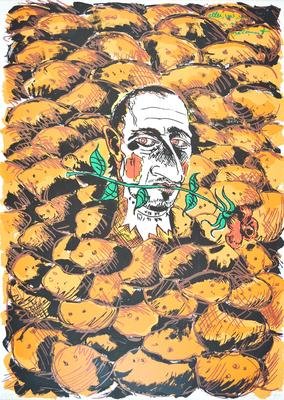 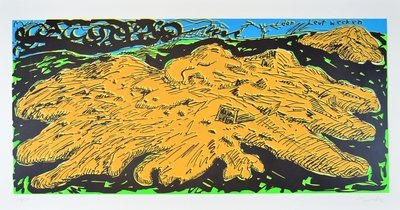 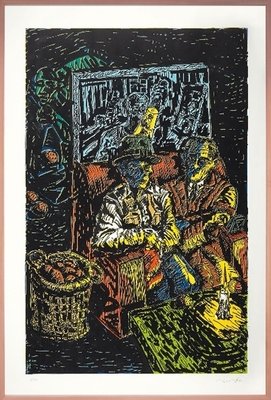 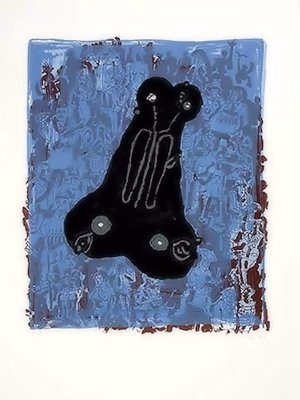 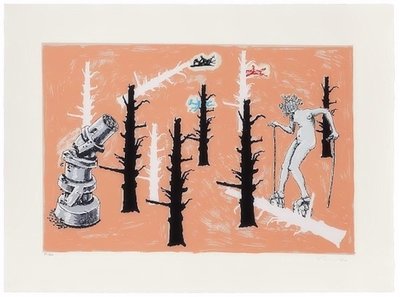 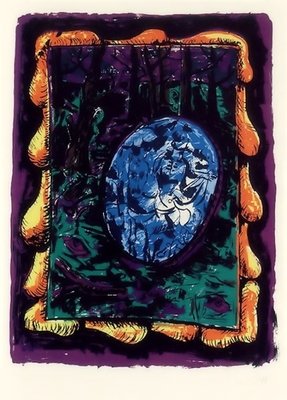 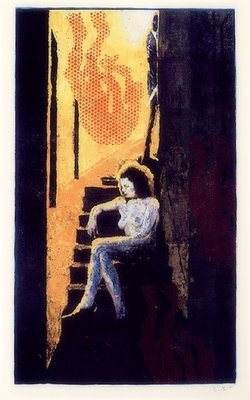 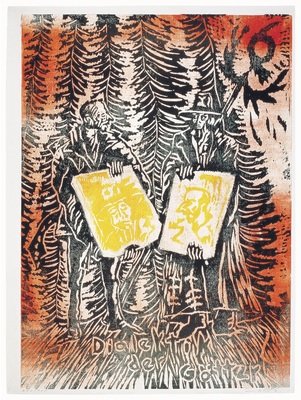 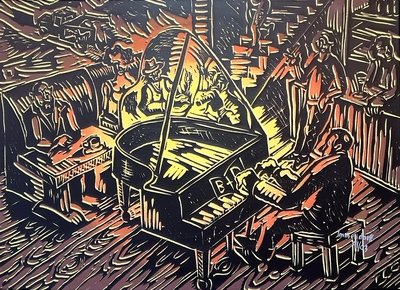 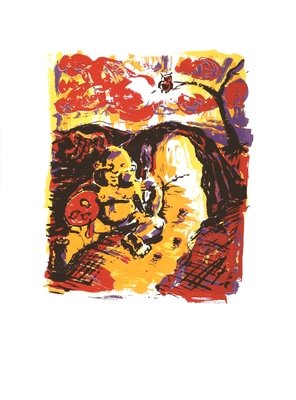 Jörg Immendorff was born on 14 June 1954 in Bleckede close to Lüneburg, the son of an officer and a secretary. In later years, he described his parents' early divorce in 1965 as the most shaping event of his childhood. As early as a boarding school pupil in Bonn he knew he wanted to become an artist. He began to study at the Kunstakademie Dusseldorf in the 1960s, initially in Teo Otto's class for performing art. In 1964, he switched to the art department under direction of Joseph Beuys, who was to become a role model, mentor, and benchmark of the young Immendorff's own artistic work from this time on. In cooperation with his later wife Chris Reinecke he initiated the action project Lidl. Its purpose was to give the broad public that is unfamiliar with the common art business an understanding of alternative, artistic concepts with neo-dadaist actions. In this way, art participated in the riot of the 1968 generation, with whose aims Immendorff as a member of the non-parliamentar opposition and the Maoist KDP/AO could identify. Subversive actions that were supposed to unveil the Federal Republic's dusted morality eventually led to Immendorff's expel from the academy.

From 1968 until 1981, Jörg Immendorff, who has always been an enthusiastic and committed educator, worked as an art teacher. He taught primarily at the Dumont-Lindemann-Hauptschule in Dusseldorf until he entirely turned to free art in the early 1980s. Contrary to many other painters of his generation who dedicated themselves to abstraction, Immendorff's paintings are characterised by a striking and direct objectivity with a critical and sociopolitical impetus. In 1972, he presented a selection of the group of works Agitprop at the documenta 5 in Kassel, followed by a participartion in a group exhibition at the Biennale in Venice in 1976. In the 1970s, Immendorff began to increasingly commit himself to the artistic dialogue with the GDR and to protest against the dictatorship on the other side of the wall. A close friendship has connected him to the East German painter A. R. Penck, who was persecuted in his homeland and who later relocated to the West, since they met in Berlin in 1976. In joint works the two painters thematised the East-West German reality and denounced Germany's seemingly cemented division. Eventually, Immendorff got known to a wider public through his comprehensive series Cafe Deutschland that consists of 16 large-format canvas, in which he pictorally handled the East-West conflict in an especially impressive way. The coffee house as a symbol of sociopolitical reality is a guiding theme in Immendorff's oeuvre and turned up again in the self-referential series Café de Flore, in which Immendorff adressed his own person and artistic-sophisticated environment on a bigger scale for the first time. In Immendorff's pictoral cosmos, the ape as  the artist's alter ego and artist‘s friend consistently plays a role. It functions as the artist's symbol of the fool of the society that he lives in, a social misfit who critically examines his environment. The ape stands for the artistic genius as well as the banal human instinct.

In the beginning of the 1980s, Immendorff's career increasingly gained momentum: in 1982, he featured on the Zeitgeist exhibition in Berlin, which introduced the new generation of artists in painting and sculpture, die Jungen Wilden (German for "wild youth"). Two years later, in 1984, he participated in the documenta 7 in Kassel featuring his famous sculpture Brandenburger Tor as well as the exhibition Von hier aus – Zwei Monate neue deutsche Kunst in Dusseldorf. In the same year, he opened his own trendy pub called La Paloma in the famous St. Pauli district of Hamburg; for the square opposite his pub he created a sculptural monument for the artist Hans Albers. Followed by his first guest professorship in Sweden in 1981, Immendorff received first positions as guest lecturer in Germany, at first at the Cologne factory schools, and, subsequently, at the Munich Academy of Fine Arts. During this time, he realised diverse jobs in the field of stage design, including the Salzburg Festival and the Stadttheater in Bremen. Furthermore, the multi-talented artist created illustrations for cultural newspapers, for example the Lettre International. In 1989, he was appointed professor at the Städel-Schule in Frankfurt am Main, where he taught until 1996. Afterwards, he held a chair at the Kunstakademie in Dusseldorf where his artistic occupation began. Immendorff became officially known at least since he had portrayed his friend Gerhard Schröder for the gallery of chancellors at the Chancellery building as well as the illustrations for the BILD bible

Especially the painter's private life, who masterfully employed the mass media for his own image promotion at all times, caught the media's attention. Through his relationship and later marriage with the more than thirty years younger student and Bulgarian painter Oda Jaune, whose real name is Michaela Danowska, he regularily hit the headlines in 2000. One daughter resulted from this marriage. In August 2003, Jörg Immendorff caused a scandal due to a drug incident which even led to conviction in the following year. The artist had consumed a fair quantity of cocaine in the presence of prostitutes in the suite of a high-quality hotel in Dusseldorf several times. The artist later stated that he has been consuming drugs since the mid 90s in order to cope with severe pain and the fear of death. Due to Immendorff's serious illness, the sentence was suspended and additionally charged with a heavy fine. He could also keep his professorship at the academy in Dusseldorf that he would have lost in the case of imprisonment. After a short suspension, Immendorff was allowed to teach again in 2004. In 2005, the national gallery in Berlin honoured him with a large-scale retrospective that contained all of the artist's creative periods. In the following year, the city of Goslar awarded Immendorff with the renowned Kaiserring for art that has never been an end in itself, but always strived for an immediate social impact.

In 1977, Jörg Immendorff was diagnosed with amytrophic lateral sclerosis, also known as ALS, an incurable neurological disorder. Immendorff was always open about the worsening disease of the motorical nerve system that leads to a progressive paralysis within a few years during his last years. Together with Christoph Schlingensief, the artist marked by serious illness even brought his suffering to stage in order to bring ALS into public consciousness. He also founded an ALS initiative including a grant for research of the disorder at the Berlin Charité. In spite of the progressive paralysis of his body he kept painting; he was, however, more and more dependent on his assistants' help who created his artworks based on the master's instructions. As the result of an emergency surgery in November 2005, the artist needed artificial respiration from then on. As a result of his disease, a sudden cardiac arrest caused Immendorff to die on 28 May 2007 at the age of 61 after years of suffering.