You would like to be informed about Damien Hirst's new arrivals in advance? Register now for free! 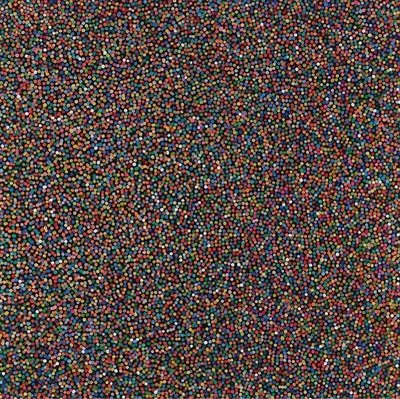 The British action and installation artist Damien Hirst attended Goldsmiths College in London in the 1980s. In 1988, the young Hirst curated the exhibition called ‘Freeze’, which was hosted in London's Docklands and is now considered as the birthplace of the generation of Young British Artists. Hirst is one of its leading representatives.

His best known work is seen to include ‘The Physical Impossibility of Death in the Mind of Someone Living’ or ‘Away from the Flock’. These involve animal bodies draped in formaldehyde, which he prepared in glass containers. In addition to this provocative and controversial work, his diamond-studded skull sculptures also rank as icons that came out of the Young British Artists. In addition, the artist created, among other things, ‘Spin Paintings’, which were produced on a round, rotating surface, or ‘Spot Paintings’, which consist of a random combination of random rows of colours. Above all else, subjects such as life, illness or death are what the contemporary painter addresses and which run like a red thread through his work.

Hirst, who was awarded the renowned Turner Prize in 1995, is now one of the most popular artists of the international art scene. In addition to numerous international solo exhibitions, a retrospective was dedicated to his work at London’s Tate Modern in 2012. These days the Brit spends his time working in Devon, Gloucester and London.

You want to buy artworks and editions of Damien Hirst, but you have further questions? We collected detailed information for this purpose.