You would like to be informed about Chiharu Shiota's new arrivals in advance? Register now for free! 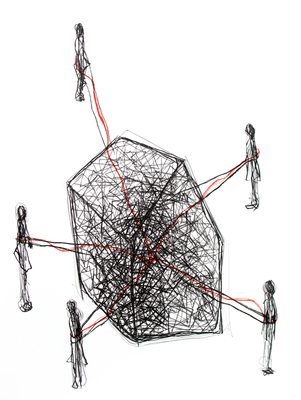 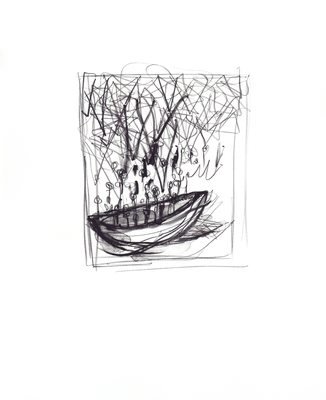 The performance and installation artist Chiharu Shiota was born in 1973 in Osaka. She first studied painting at Seika University in Kyoto. During this time, she completed a study abroad at the Canberra School of Art in Australia. There Shiota felt restricted by the medium oft the canvas and began to explore the boundaries of her paintings. The artist staged first performances using her own body as a canvas. These early performances can be described as radical self-attempts reminiscent of the disturbing depictions of Viennese Actionism. In 1996 she moved to Germany and continued her studies in Hamburg and Braunschweig, before moving to the University of the Arts in Berlin in 1999, where she was a student of Marina Abramović and Rebecca Horn.

Chiharu Shiota is famous for her space-consuming installations of woolen threads. The use of cotton threads is not only an essential feature of her artworks, but also became a trademark of the Japanese artist. She creates complex wool nets and visually stunning thread worlds. In these mostly black, red or white threads, the artist weaves everyday objects and mementos, such as clothes, shoes, pianos, keys, or even herself. In doing so the artist creates material-rich and expansive installations that reminds of cloud-like air sculptures and have a strong associative effect on the observer.

In 2015 Chiharu Shiota had the honor to represent Japan at the 56th Venice Biennale. In her works, the Japanese artist deals with issues of human existence, identity, or the current issues. Shiota‘s artworks and editions have been shown worldwide and are part of important exhibitions and collections.

You want to buy artworks and editions of Chiharu Shiota, but you have further questions? We collected detailed information for this purpose.