You would like to be informed about Imi Knoebel's new arrivals in advance? Register now for free! 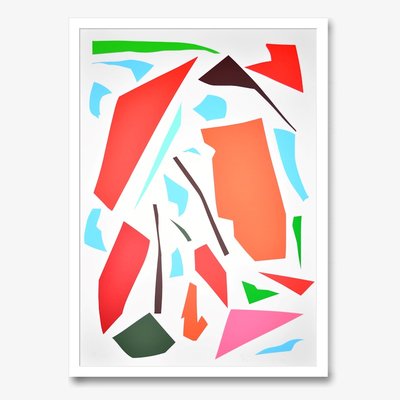 Imi Knoebel artworks and editions for sale
Table of contents 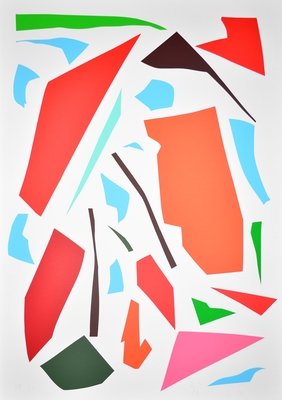 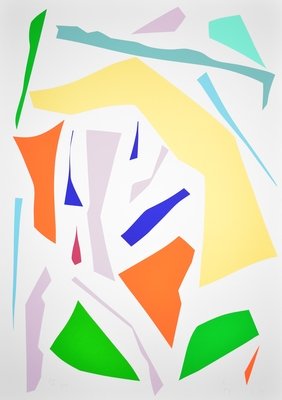 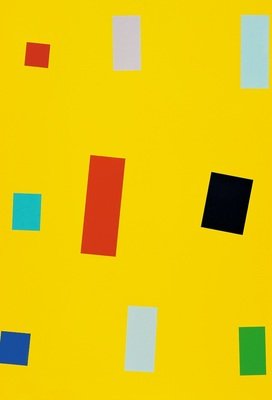 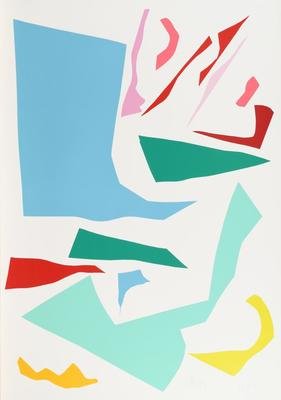 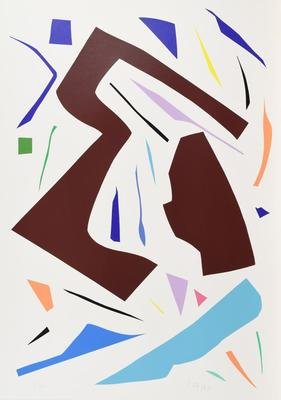 Imi Knoebel was born on December 31, as Klaus Wolf Knoebel in Dessau. He spent his early years in the town Grumbach near Dresden. In 1950 his family moved to Mainz, where Knoebel spent his youth.

In the age of 22, Knoebel began his study at Werkkunstschule in Darmstadt. There he met his good friend Rainer Giese. The close friendship with Giese yielded that they gave themselves the stage name „Imi“. Imi was a farewell between the two artists. Later it was referred as a short form for „Ich mit Ihm“. In 1964 Knoebel und Giese finished their studies together in Darmstadt and both artists moved to Dusseldorf, where they began to study at Staatliche Kunstakademie Dusseldorf. They where known as the artist duo „Imi + Imi“. At first they where both in the applied art class of Walter Breker, however the two realized that they wanted to change to the class of Joseph Beuys. Especially Beuys was in the time of carination, a role model for Imi+Imi. By means of rebellious and provocative actions Beuys was a symbol and expression of a social upheaval. Knoebel and Giese were looking for individual development opportunities and found this in the class of Beuys. They could identify themselves with Joseph Beuys way of teaching and his art and were immediately accepted in his class. In room 20, most of Beuys students were accommodated. Knoebel and Giese were allowed to work in the adjacent room 19 with artists such as Jörg Immendorff and Blinky Palermo (Peter Heisekamp). With the separate room, the artists could develop their art and confidence freely without being criticized by Beuys. Blinky Palermo became a good friend of Giese and Knoebel and together they founded a minimal art movement.

Imi Knoebel met his future wife Carmen Drawe in the Bar Ratinger Hof. She was one of the owners. They were a couple and were married on May 28, 1974. Shortly after, the first daughter Olga Lina was born. In the same year Imi Giese committed suicide in Dusseldorf. This was a huge shock for Imi Knoebel. In many works Knoebel dealt with the death of his best friend. In 1977 the second daughter Stella Liza was born.

Today, Knoebel lives and works in Dusseldorf. Because of the high appreciation of his work, he was awarded in 2006 with honorary doctor’s degree from the Friedrich-Schiller-University in Jena.

Imi Knoebel, Georg Baselitz, Joseph Beuys, Günther Uecker and other artists campaigned in 1982 against the martial law in Poland for the Polish Solidarność. Various works of the artists were auctioned for Solidarność. In 1988 Knoebel painted the artwork Kinderstern. It is still the symbol of children´s rights and finances projects for children in need. The Kinderstern is presented as a „Soziale Plastik“ and shows the changing concept of Joseph Beuys’ work, through which art should also appear as a social change.

In the period between 1966 and 1968 Knoebel produced the so-called Linienbilder. 44 works were created in black and white. By graphic means the paintings were attributed to the physical medium, so that minimalistic works could be created. In the mid 1960s the art as such was questioned. This questioning of the art was the stimulus for Knoebel, which he used in his large size, color and proportion works.

In his work, Imi Knoebel dealt also with the image concept. He examined especially internal image structures of classical paintings while focusing primarily on the problem of immateriality. Among others he was influenced in his paintings by constructivist artists such as Kasimir Malewitsch (Das Schwarze Quadrat).

During his studies, hardboards were his preferred working material. Later on he made scale sculptures made of superimposed aluminium plates. Through geometric shapes and color-intensive work, Knoebels work has similarities to Piet Mondrian. He arranged the colorful plates on uneven and irregular structures.

In 1968 Imi Knoebel worked on the large-scale work Raum 19. This work was made at the Staatliche Kunstakademie in Dusseldorf and was named after the former classroom. It showed the confrontation between painting and room.

In the early 1980s, Imi Knoebel expanded his repertoire with stones, corrugated metal, old windows, pipes and many other materials.

After the death of his good friend Imi Giese, Knoebel presented his work Eigentum Himmelreich. Through free shapes, lines and cubes Knoebel began to deal with the suicide of his friend.

For Imi Knoebel each image and each sculpture was part of the whole picture. In 2005 he renewed his old work Raum 19 and expanded it. This is just one of many works that Knoebel continued again and supplemented with new color-intensive forms.

In 2008 Imi Knoebel was commissioned for the cathedral of Reims to create six new stained glass windows. Three years later, the project was completed. For the stained glass windows, Knoebel took his inspiration from his own works, the so-called Messerschnitte. Since the completion the windows glow in the colors blue, red, yellow and white and are composed of abstract areas of glass.

Imi Knoebels work has been exhibited several times in cooperation with the Deutsche Bank and the Solomon E. Guggenheim Foundation, the so-called German Guggenheim. In 2009 Knoebels oeuvre was shown in an exhibition. Divided into two parts, more recent works were presented under the title ICH NICHT. Knoebel responded with the title to Barnett Newman’s question Who´s Afraid of Red, Yellow and Blue. Knoebel dealt here intensively with the primary colors. The second part has been known under the title ENDUROS. Here Knoebel showed older works between the years 1968 and 2005. In this exhibition you were able to see Knoebels complete oeuvre.