You would like to be informed about Marlon Wobst's new arrivals in advance? Register now for free! 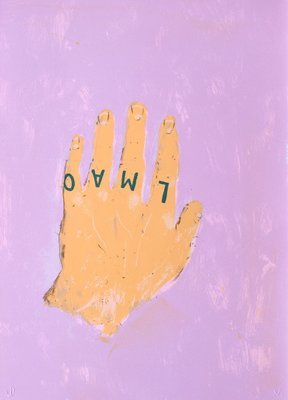 Marlon Wobst is a contemporary artist from Germany. Wobst studied in Mainz at the Kunsthochschule and at the Berlin University of the Arts with a subsequent master class with Robert Lucander.

Wobst's artworks and editions are characterized by his playful joy in dealing with genre, content and form. In his art he strives for an accurate level of realistic portrayal and seeks proximity to the imperfect and fragile. A central topic for Wobst is the examination of the world of body optimization and beauty obsession, so his works can be conceived as a comment to the slick and perfect.

Motives of his artworks and editions are for example basketball players, swimmers or cyclists. The limbs of his nearly naked figures seem to be curiously knotted or lengthened. Wobst transforms, falsifies or alienates his figurative motifs. With sparing but generous brushstrokes, his figures and bodies dissolve into abstract shapes and fragments. By painting directly on the canvas, scraping it off again and shifting his picturesque figure motifs, his works appear almost like reliefs.

The artist draws inspiration from his surroundings, his own past or from the media flood of Facebook, Instagram and Co. Characteristic of Wobst's artworks and editions is the touch of comedy, which is inherent inthem. Always skeptical, the artist questions motifs and genre of his painting. He wants to keep the stories as simple as possible, so nothing can distract from his painting. Wobst creates surreal, sometimes melancholic and humorous imagery that invites the viewer to lose himself in it.

Wobst’s artworks and editions have been shown in numerous group and solo exhibitions in Germany and abroad.

You want to buy artworks and editions of Marlon Wobst, but you have further questions? We collected detailed information for this purpose.