You would like to be informed about Karl Otto Götz's new arrivals in advance? Register now for free! 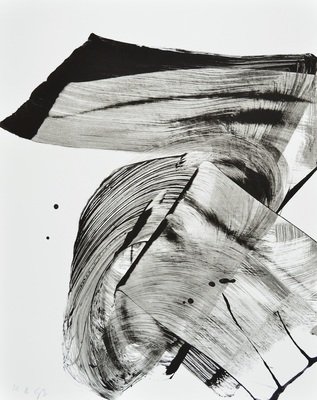 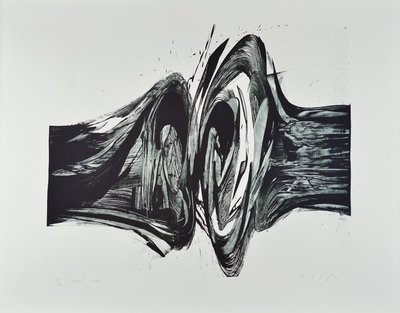 After 1933 he began to paint pictures, he made 1935 his first splash images. They showed still partly figurative forms, but mostly informal structures have been added. Among his early artworks were also woodcuts, Luftpumpenbilder and Frakturenfibel from 1945.

From 1952 Götz developed a technique with paint and paste. Because of this he became chief agent of “Deutsche Informel“. To produce the typical effect of Götz works, he produced his artworks from then on according to this principle: He first put paste on to the subsoil, and then added gouache. Then he ripped with a squeegee the wet paint again and again open and worked with gouache inside. This technique allowed a faster rate in the manufacture of his paintings and his informal structures could be produced through the squeegee colors.

In the same year Karl Otto Götz founded with Otto Greis, Heinz Kreutz and Bernhard Schultze the artists group 'Quadriga' in Frankfurt. In the post-war period, the artist group had a big role in ensuring that the German art scene remained intact. They were the main actors of the informal painting.

In 1975 Götz and Rissa moved to Westerwald. There he developed new schemes. From the late 1970s on he produced artworks and editions without squeegee. After he left in 1979 the Staatliche Kunstakademie Dusseldorf, he published in 1984 his autobiography Erinnerungen und Werk. In 1986 Götz made the series Giverny. 30 works were included. Because of his technique, Götz was equated with Jackson Pollock. Some of his artworks carried out the all-over painting like Pollock.

Götz painting process seemed spontaneous, but the process often lasted for days.
Later, from 1995 onwards he made works of ceramics. Other techniques such as light paintings and woodwork were also among his later works.

In the late 1990s the K. O. Götz und Rissa-Stiftung was launched. For his 90th birthday in 2004, he was appointed by the Staatliche Kunstakademie Dusseldorf as an honorary member. From there on he dealt with disasters and attacks in his art, such as the attack on the towers of the World Trade Centre or the bombing of Dresden.

In February 2014, the Neue Nationalgalerie devoted a retrospective to the 100th birthday of Karl Otto Götz. 60 of his works have been shown and celebrated his artistic existence.

You want to buy artworks and editions of Karl Otto Götz, but you have further questions? We collected detailed information for this purpose.