You would like to be informed about Thierry Noir's new arrivals in advance? Register now for free! 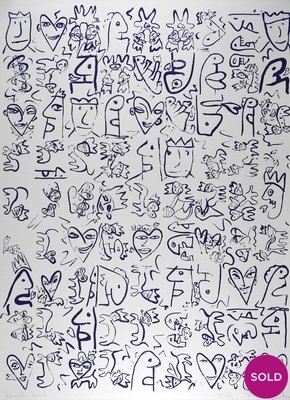 French artist Thierry Noir gained international recognition through his painting of the Berlin Wall. Born in Lyon in 1958, the painter began painting the first parts of the west side of the Wall with other artists in 1984, two years after he had moved to the German capital.

Noir’s works demonstrate a reduced, almost symbolic formal language that focuses on the essential statements of his artworks and editions. In this manner, he creates expressive compositions that never end up being entirely abstract despite the great reduction. His oeuvre encompasses bright and lively coloured surfaces that are bordered in black. His ‘Heads’ are a famous motif - which also adorn the East Side Gallery in Berlin. Because of his artistic formal language, he is often compared with the artist of the same age, Keith Haring.

Nowadays, Noir ranks among the most famous street artists of Berlin. His iconic heads on the Berlin Wall are known all around the world. In addition to street art, the artist also creates serigraphs and sculptures that express his unique imagery.

You want to buy artworks and editions of Thierry Noir, but you have further questions? We collected detailed information for this purpose.