You would like to be informed about Karin Kneffel's new arrivals in advance? Register now for free! 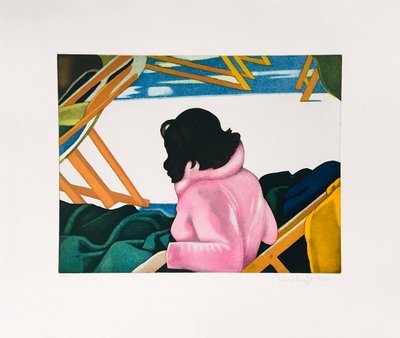 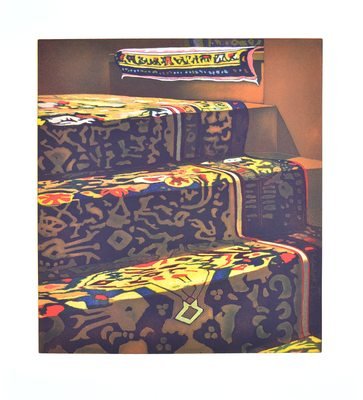 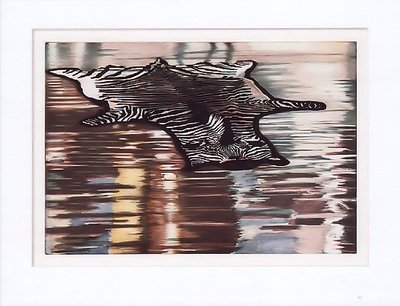 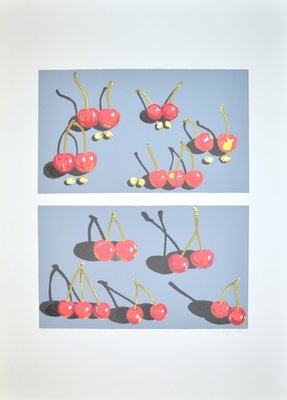 With her artistic work Kneffel belonged to hyperrealism. She has a wide range of topics and continues to surprise the viewer with peculiar dimensions of painting. A striking feature of her works is the finely detailed elaboration of the objects and persons. She uses very fine brush to create these perfect smooth surfaces.

Her early works were at the beginning of the 1990s. She showed a series of animal head designs. She made several small-format portraits of known animals such as sheep, cows, chickens and goats. Unusual for depictions of animals she put the animals as a copy into the picture. So they had for the viewer in a surreal way their own personality. Other than many depictions of animals, Kneffel made realistically portraits and not heroic drawings of the animals.
Another subject that Kneffel painted later are fruits. She portrayed oversized fruits like plums, cherries, grapes and oranges.

Through multiple reflections on the fruit surface Kneffel created a collection of reflections in their works. She used them in numerous other works. So grounds, raindrops, different interiors and other objects became means for her to reflect the world. Kneffel cherished an illusion about the reality. The numerous refractions of light and the reality of the viewer are shown in several parts. A shimmering repertoire of paintings made Kneffel Europe-wide famous. She painted not only fruits, but also other types of food like chocolate pudding.

In 2011 Kneffel called the attention of the gallery owner Larry Gagosian. She had in 2012 her first solo-exhibition in Gagosian Gallery in New York. This was the start of her international career. In this exhibition she showed black and white photos of rooms in house Ester of Mies van der Rohe. She plated these photos with streaks and drops and also added in the background such patterns, so that the viewer got the feeling of looking through a wet glass.

At the present time Kneffel especially uses oil on canvas and watercolours for her paintings. Often pictured sculptures are her favoured objects. Also on them the reflections of surroundings and reality that distinguish Kneffel’s artwork can be seen.

You want to buy artworks and editions of Karin Kneffel, but you have further questions? We collected detailed information for this purpose.