You would like to be informed about Joan Jonas's new arrivals in advance? Register now for free! 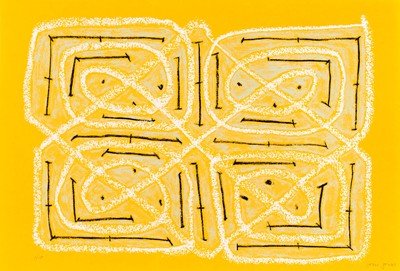 American artist Joan Jonas was born in New York in 1936. After studying sculpture and art history at Mount Holyoke College, the School of the Museum of Fine Arts in Boston, and Columbia University, Jonas became internationally known for her performance and video art. Since the 1960s she has combined these media in multimedia installations and is seen as a pioneer in the field of video performance art.

In her works, she follows the principle of art as a constant process of development. She combines audiovisual media with sketches or plastic objects to create ever new installations. Motifs from literature, theatre and cultural rites lend themselves as sources of inspiration for her. In her artworks and editions she seeks a way to express how certain life events can be arranged in time and space. The mirror is a frequently recurring motif in her early works. It can be understood as a symbol of self-perception and reflection as well as a connecting element between the viewer and the piece of art. Her work has become increasingly symbolic and ritualistic in character over the course of time.

You want to buy artworks and editions of Joan Jonas, but you have further questions? We collected detailed information for this purpose.