You would like to be informed about Ilya Kabakov's new arrivals in advance? Register now for free! 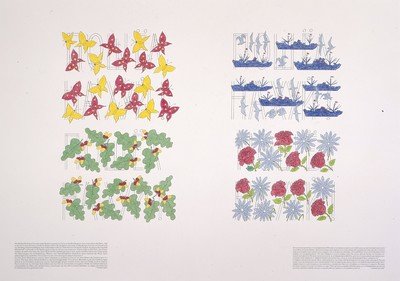 Concept artist Ilya Kabakov was raised in the Soviet Union. He was trained there in the 1940s in the style of Socialist Realism at the Surikov Art Academy in Moscow. In the following years he initially began working successfully as an illustrator, before increasingly detaching himself from the specifications of the Socialist regime and developed his own style. Thanks to the blossoming alternative art scene in Moscow, he finally met other conceptual artists who opposed the existing understanding of art in the Soviet Union. Thus, at the end of the 1970s, Kabakov's first picture walls were created, which clearly parodied the art style that prevailed in the Soviet Union at the time. As he was denied any exhibition of his work in his home country, his first solo exhibition took place in the Kunsthalle Bern in 1985. He left the Soviet Union shortly thereafter.

The artist’s Soviet background plays a major role in his artworks and editions, in the past as well as now. For example, he thematically deals with contemporary everyday life and reflects the social and political problems of his time. He is known for his expansive installations which he has been creating since 1982. Beyond that, he often incorporates sculptural objects into his large-format paintings and develops exhibition concepts that are based on the respective spaces that create a collage-like overall piece of art.

The works of the multi-award-winning artist are part of the collections of the Centre Pompidou in Paris and the Moscow Museum of Modern Art. They are exhibited internationally. Kabakov currently lives and works on Long Island together with his wife.

You want to buy artworks and editions of Ilya Kabakov, but you have further questions? We collected detailed information for this purpose.