You would like to be informed about Christopher Wool's new arrivals in advance? Register now for free! 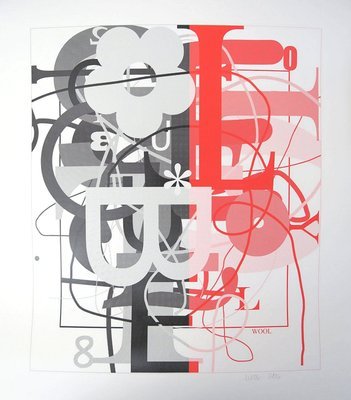 The graphic artist and painter Christopher Wool was born in Boston in 1955. His move to New York allowed him to meet other contemporary artists such as Jeff Koons, who would go on to influence him artistically. Other influences included the big city’s punk and no wave scene.

He reached international fame in the 1980s with his so-called ‘word paintings’. He sprayed, painted or fastened black letters, words and word fragments on white aluminium panels using the stencil technique. Due to the very reduced design language, the individual letters became the compositional element of his work. They provided the content, but also the appearance of the work, which was determined by an interplay of white spaces and black letters. In the following years and up until today he expanded his artistic repertoire by using new techniques and materials, such as serigraphs, spray cans and solvents as well as working with digital tools to create his art. His interest in the relationship between the image’s element and the empty gaps has remained unchanged to this day. It is also the defining aspect of his artworks and editions.

You want to buy artworks and editions of Christopher Wool, but you have further questions? We collected detailed information for this purpose.