You would like to be informed about Banksy's new arrivals in advance? Register now for free! 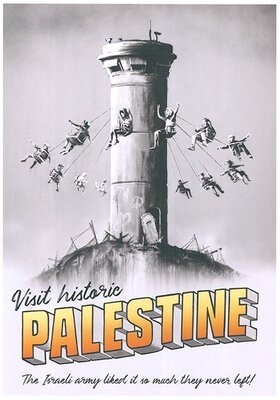 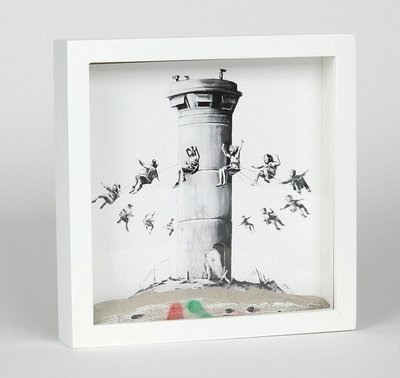 One of the most popular street art and action artists of the 21st century is behind the Banksy pseudonym. The British artist rose to fame thanks to his black and white stencil graffiti which he often sprays onto building walls illegally or places in various renowned museums without permission.

In his artworks and editions, Banksy repeatedly refers to current themes and conflicts, often using a satirical visual language. His works are socially critical and polarise not only due to the chosen motif but also the locale he picks... The environment of the graffiti thus influences both its actual composition and the interpretation of the work. The combination of an existing motif with a new object is a recurring stylistic element in Banksy's work. For example, by replacing a Molotov cocktail in the hand of a masked demonstrator with flowers. The artist thereby moves the initial meaning of the original towards its very opposite. In addition to the well-known stencil graffiti, Banksy also attracts international attention through other actions, such as when he recently destroyed his own work at an auction.

Banksy's works can currently be seen in cities around the world and in a few museums. The artist’s identity remains a mystery to this day.

You want to buy artworks and editions of Banksy, but you have further questions? We collected detailed information for this purpose.